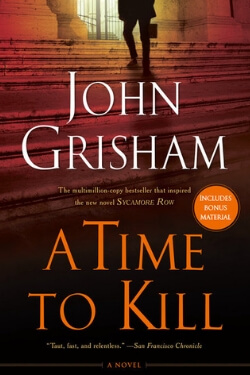 Before The Firm and The Pelican Brief made him a superstar, John Grisham wrote this riveting story of retribution and justice. In this searing courtroom drama, best-selling author John Grisham probes the savage depths of racial violence as he delivers a compelling tale of uncertain justice in the small southern town of Clanton, Mississippi.

The life of a ten-year-old girl is shattered by two drunken and remorseless young men. The mostly white town reacts with shock and horror at the inhuman crime. Until her black father acquires an assault rifle–and takes justice into his own outraged hands.

For ten days, as burning crosses and the crack of sniper fire spread through the streets of Clanton, the nation sits spellbound as young defense attorney Jake Brigance struggles to save his client’s life…and then his own…

Quotes from A Time To Kill

And until we can see each other as equals, justice is never going to be even-handed. It will remain nothing more than a reflection of our own prejudices

Lucien had taught him that fear was good; fear was an ally; that every lawyer was afraid when he stood before a new jury and presented his case. It was okay to be afraid – just don’t show it.

America is a war and you are on the other side. How’s a black man ever going to get a fair trial with the enemy on the bench and in the jury box? My life in white hands? You Jake, that’s how. You are my secret weapon because you are one of the bad guys. You don’t mean to be but you are. It’s how you was raised.