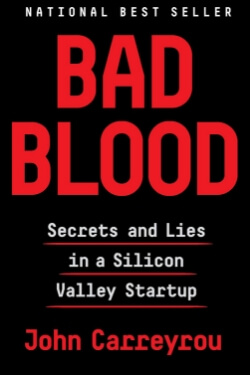 In 2014, Theranos founder and CEO Elizabeth Holmes was widely seen as the female Steve Jobs: a brilliant Stanford dropout whose startup “unicorn” promised to revolutionize the medical industry with a machine that would make blood testing significantly faster and easier. Backed by investors such as Larry Ellison and Tim Draper, Theranos sold shares in a fundraising round that valued the company at more than $9 billion, putting Holmes’s worth at an estimated $4.7 billion. There was just one problem: The technology didn’t work.

A riveting story of the biggest corporate fraud since Enron, a tale of ambition and hubris set amid the bold promises of Silicon Valley.

Hyping your product to get funding while concealing your true progress and hoping that reality will eventually catch up to the hype continues to be tolerated in the tech industry.

By positioning Theranos as a tech company in the heart of the Valley, Holmes channeled this fake-it-until-you-make-it culture, and she went to extreme lengths to hide the fakery.

The way Theranos is operating is like trying to build a bus while you’re driving the bus. Someone is going to get killed.

When the officer asked what he’d taken, Sunny blurted out in his accented English, “He stole property in his mind.

John Carreyrou is was a reporter at The Wall Street Journal and a two-time winner of the Pulitzer Prize. For his investigative reporting on Theranos, Carreyrou won a number of awards and published the bestselling book Bad Blood. He currently lives in Brooklyn, New York.