Home to the Big Five publishers, New York City is a bookworm’s dream full of literary destinations. Find out all the best spots in my guide to New York City for book lovers.

In January, I had the pleasure of crashing my sister’s business trip to New York City.  She was there for a fundraising campaign and offered up the second bed in her hotel room. A long weekend without kids in the Big Apple was the perfect winter getaway for me.

Since my sister was working, I had plenty of free time to explore Manhattan on my own. I’d never vacationed solo before, and it was so nice to visit all the literary destinations that caught my fancy without wondering if my husband or kids would enjoy them, too.

So for all my fellow bookworms, here’s my guide to New York City for book lovers. During my four days in the city, I visited three top-notch literary destinations that you don’t want to miss.

The rest of the time I was spending time with my sister. We had an unforgettable time ice skating in Central Park one night and a somber visit to the 9/11 memorial. Also, I spent a chunk of each day cuddled up in bed reading books.

So if you are a bookworm, here’s the scoop on the best literary things to do in New York City. 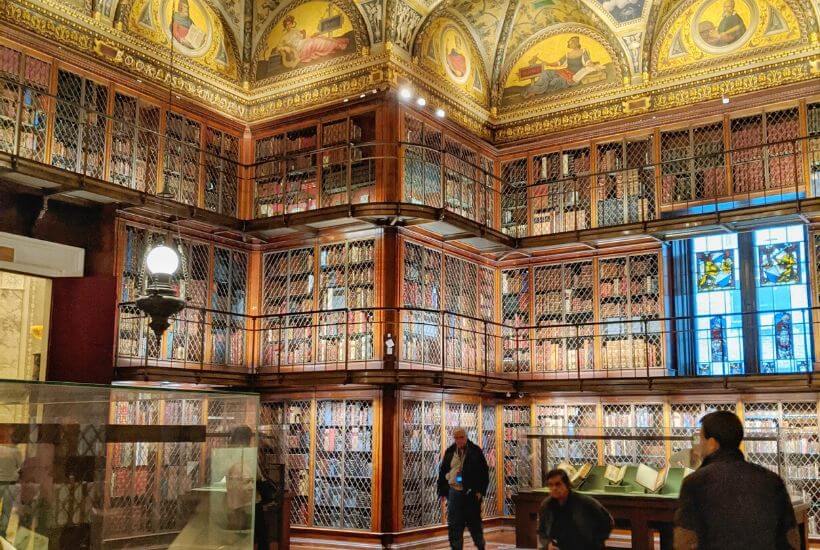 Of all the literary destinations in NYC, the must-see spot in New York City for book lovers to visit is The Morgan Library on 36th Street and Madison. Built by Pierpont Morgan in the early 1900s as an attachment to his home, the building house three magnificent rooms connected by a majestic rotunda.

In Mr. Morgan’s study, you’ll find his desk surrounded by low bookshelves full of incredible books. I spotted the works of Austen, Dickens, and Milton gracing the walls. Even better, in one corner of the room, Morgan has a two-story vault where he kept his most treasured books.

However, it’s the library that will be the greatest draw for any bookworm visiting New York City. Right out of Beauty and the Beast, you have three floors of bookshelves lining the walls. Better yet, the upper two levels of bookshelves are only accessible by hidden staircases.

It’s in the library that Morgan famously stopped a financial crisis in 1907 by locking the doors and refusing to let any of the bankers out until all had come to an agreement. This move hailed him as a national hero but also worried officials enough that the government established financial oversight which later led to the founding of the Federal Reserve.

Don’t expect much from the museum part of the building. I was extremely unimpressed, though, at the time of my visit, two of the major galleries were closed. However, the library and study amply make up for the underwhelming museum and place this premier spot in New York City for bookworms. 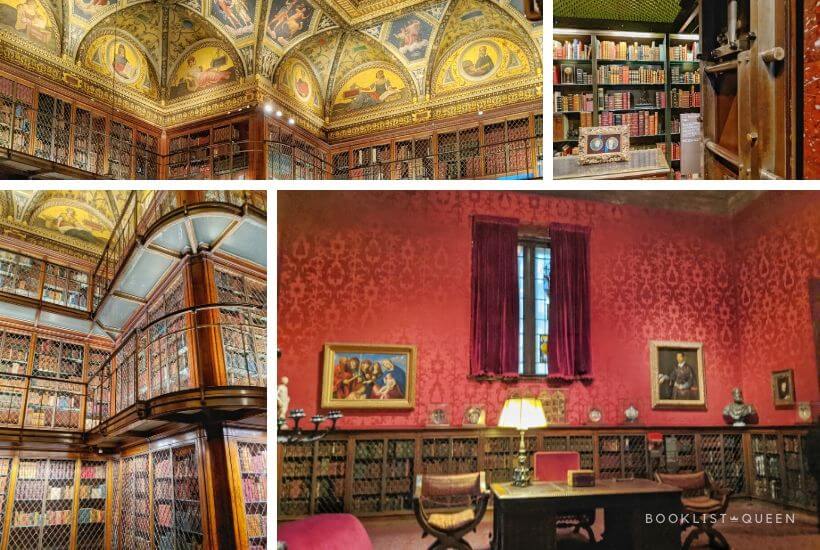 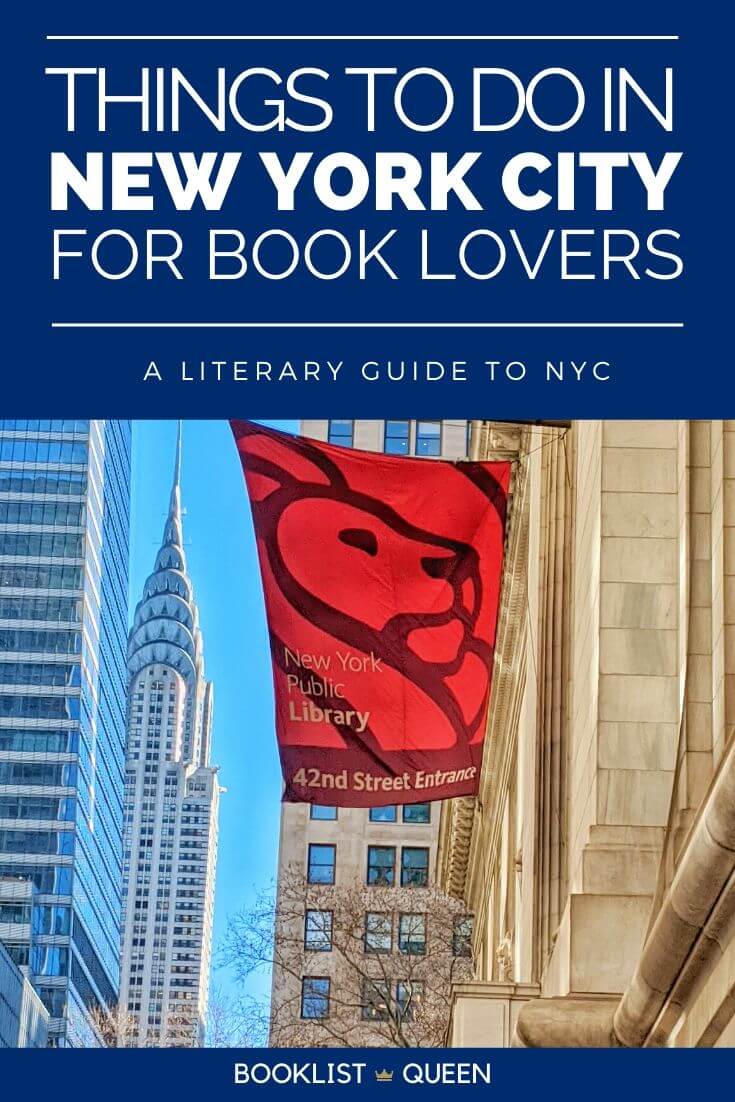 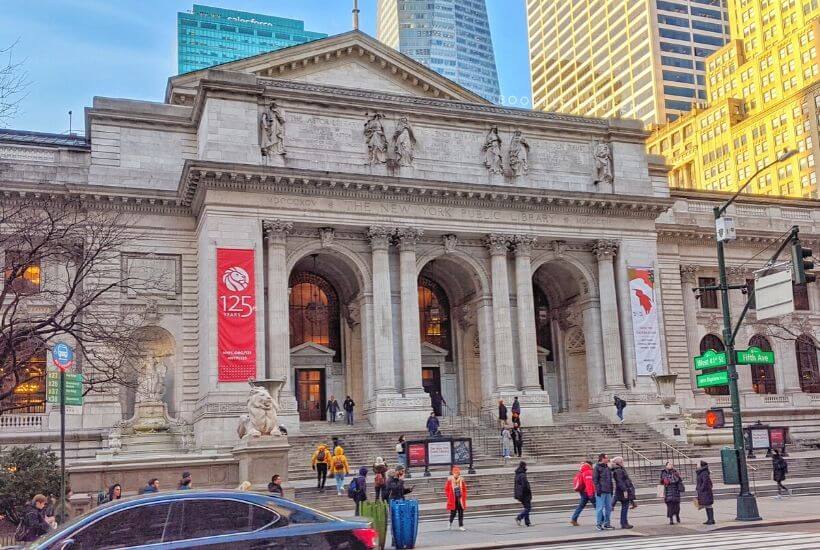 The Stephen A. Schwarzman Building on the corner of 42nd Street and 5th Avenue houses the main branch of the New York Public Library. Don’t expect to check out a book here, the building mainly houses research collections with the children’s section in the basement the only circulating collection in the building.

Dedicated in 1911 by President Taft, the entrance on 5th Avenue is guarded by two stately lions. You enter into Astor Hall, a gorgeous room of white Vermont Marble. There you’ll find the information desk where the tours of the building begin. Also off to the side are a small coffee shop and the Library Store, a gift shop that will leave any bookworm salivating.

Other areas of interest include the Periodicals & Jewish division and the Maps & Local Genealogy collections on the first floor. A permanent exhibit about the history of the library resides on the second-floor hallway overlooking Astor Hall.

The third floor has sweeping paintings in the McGraw Rotunda which then enters into the Rose Reading Room, a must-see for any visit to the Schwarzman Building. On the bottom floor, you’ll find the Children’s Room, noted for being the homes of Christopher Robin’s actual stuffed animals that inspired A. A. Milne’s Winnie-the-Pooh stories.

Neighboring the Schwarzman Building is Bryant Park, where you’ll a relaxing place to grab a bite to eat. In the winter, you can even go ice skating, though I recommend the Wollman Rink in Central Park instead. 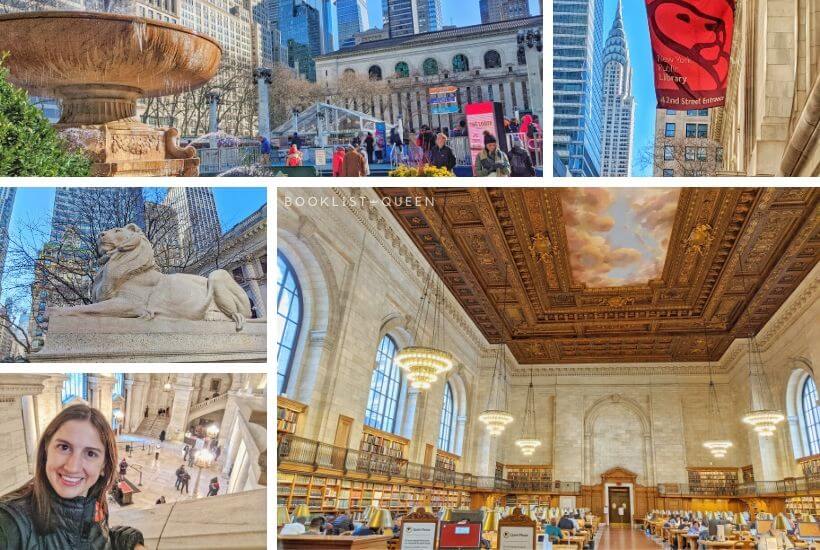 Free Tours of the Schwarzman Building

Free tours of the Schwarzman Building are available at 11 am Monday through Saturday and at 2 pm every day. A docent will lead you around the building explaining the history of the building and the collections housed within. Groups are limited to 25, but when I visited, they just split everyone into two groups to accommodate more visitors.

Unfortunately, the tour spent more time in the hallway describing rooms than visited actual rooms themselves. We only entered two rooms, both of which are open to the public.

Instead, I would suggest doing the free self-guided audio tour. You’d get all the same information, but be able to hear much better and linger much longer.

However, participants in the docent-led tours do get 10% off at the gift shop. 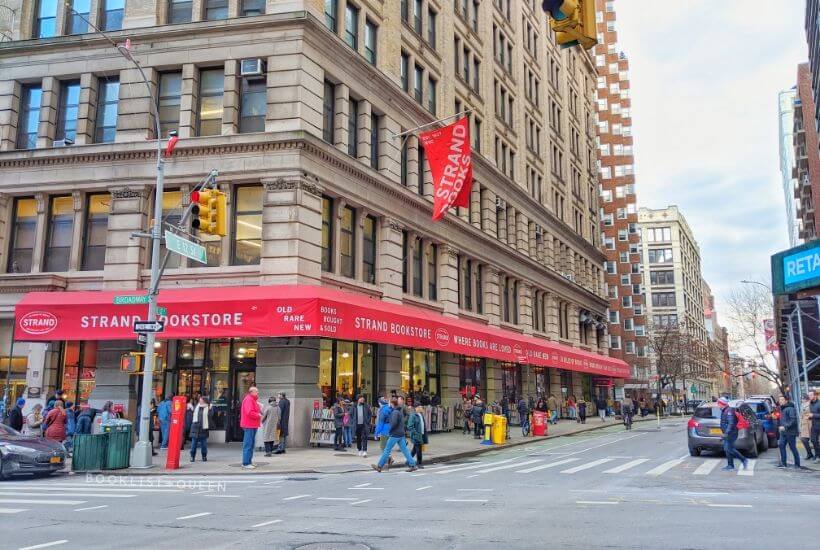 The most famous of all the bookstores in New York City, The Strand was founded in 1927. Located on the corner of 12th Street in Broadway, The Strand was originally in an area known as “Book Row.” This six-block radius of the city housed over forty bookstores, all of which have closed except The Strand.

Passed down through three generations of the Bass family, The Strand is best known for carrying over 2.5 million books on its 18 miles of bookshelves.

The first floor of the store is packed with bestsellers, new releases, and popular fiction. Tables are laid out with staff picks and featured books that are guaranteed to catch your eye. Along the perimeter, fiction books are stacked to the ceilings on shelves so high you would need a ladder to reach many of them.

With three more floors to explore, you are sure to find the book you are looking for. Or be so overwhelmed by the many choices that you can’t decide on just one.

Broadway Plays Based on Books

Can you go on a trip to New York City and not see a show?

Yes, actually because I did. Only because my sister didn’t have any spare tickets to West Side Story. (Which she said was spectacular, by the way). Also, it was snowing, and the book I was reading was really good.

However, one of the best things to do in NYC is to attend a Broadway play – or an off-Broadway production. If you are a bookworm who is also into theater, why not try a play based on a book? Hollywood loves to adapt books into movies, so why should Broadway be any different. You won’t have to look for to find an excellent option.

Current Broadway Plays Based on Books 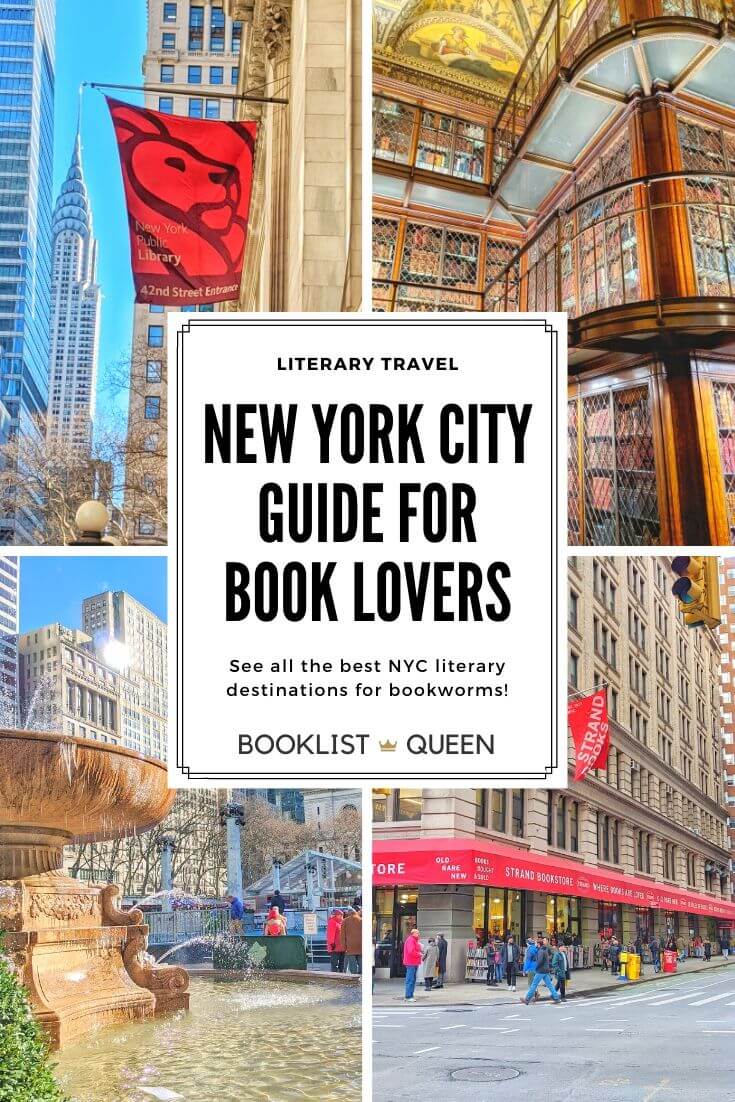 At the NoMad Hotel in Midtown Manhattan, The Library has two levels of books connected by a spiral staircase. Surrounded by gorgeous books, you can enjoy light refreshments and drink options. The Library is only open to the public before 4 pm. After that, it is exclusively reserved for hotel guests.

The only completely straight walkway in New York City’s Central Park, the Mall is nicknamed Literary Walk because the Southern End holds statues of famous writers. Enjoy a walk under the American Elms through this tree-lined avenue.

The ultimate place to stay in New York City for book lovers is the Library Hotel on Madison Ave at 41st Street. With books everywhere and a Wine and Cheese Reception every evening, you’ll find yourself right at home during your trip.

The final home of renowned poet Edgar Allan Poe is located in the Bronx. Purchased by New York City in 1913, the Edgar Allan Poe Cottage is administered by The Bronx County Historical Society. Admission for adults is only $5, but the cottage is only open during the day Thursday-Saturday and on Sunday afternoons.

What other places do you recommend in New York City for book lovers?