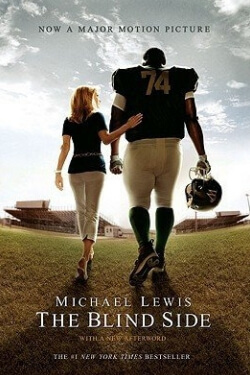 The young man at the center of this extraordinary and moving story will one day be among the most highly paid athletes in the National Football League. When we first meet him, he is one of thirteen children by a mother addicted to crack; he does not know his real name, his father, his birthday, or any of the things a child might learn in school such as, say, how to read or write. Nor has he ever touched a football.

What changes? He takes up football, and school, after a rich, Evangelical, Republican family plucks him from the mean streets. Their love is the first great force that alters the world’s perception of the boy, whom they adopt. The second force is the evolution of professional football itself into a game where the quarterback must be protected at any cost. Our protagonist turns out to be the priceless combination of size, speed, and agility necessary to guard the quarterback’s greatest vulnerability: his blind side.

Quotes from The Blind Side

He was ignorant, but a lot of people mistook ignorance for stupidity, and knowingness for intelligence.

He was the person for whom the clock was always running out, the game was always tied, and the ball was always in his hands.

A new force in pro football, Taylor demanded not just a tactical response but an explanation. Many people pointed to his unusual combination of size and speed. As one of the Redskins’ linemen put it, “No human being should be six four, two forty-five, and run a four-five forty.”

“What I learned playing basketball at Ole Miss,” he said, “was what not to do: beat up a kid. It’s easy to beat up a kid. The hard thing is to build him up.”

Michael Lewis is a bestselling nonfiction author and a columnist for Bloomberg Opinion. His works include The Fifth Risk, Flash Boys, The Big Short, The Blind Side, and Moneyball. He grew up in New Orleans and currently lives in Berkley, California. Visit the author’s website →