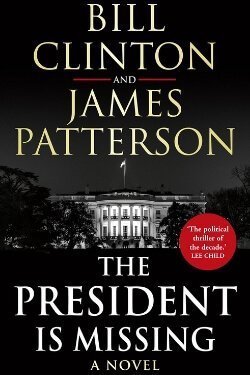 As the novel opens, a threat looms. Enemies are planning an attack of unprecedented scale on America. Uncertainty and fear grip Washington. There are whispers of cyberterror and espionage and a traitor in the cabinet. The President himself becomes a suspect, and then goes missing…

Quotes from The President is Missing

Gerald Ford once said that an impeachable offense is whatever a majority of the House of Representatives says it is.

Participation in our democracy seems to be driven by the instant-gratification worlds of Twitter, Snapchat, Facebook, and the twenty-four-hour news cycle.

If there is nothing else to learn from history, it’s that from humans to animals, from the most primitive to the most civilized, most individuals want to be led. Take out the leader, and the rest of the pack panics.

William Jefferson “Bill” Clinton (born William Jefferson Blythe III) was the forty-second President of the United States, serving from 1993 to 2001. He was the third-youngest president, older only than Theodore Roosevelt and John F. Kennedy. He is the husband of the junior United States Senator from the state of New York and a Democratic candidate in the 2008 US presidential election, Hillary Rodham Clinton.