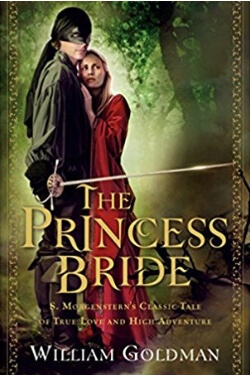 Anyone who lived through the 1980s may find it impossible—inconceivable, even—to equate The Princess Bride with anything other than the sweet, celluloid romance of Westley and Buttercup, but the film is only a fraction of the ingenious storytelling you’ll find in these pages. Rich in character and satire, the novel is set in 1941 and framed cleverly as an “abridged” retelling of a centuries-old tale set in the fabled country of Florin that’s home to “Beasts of all natures and descriptions. Pain. Death. Brave men. Coward men. Strongest men. Chases. Escapes. Lies. Truths. Passions.”

Quotes from The Princess Bride

My name is Inigo Montoya, you killed my father, prepare to die!

Who says life is fair, where is that written?

Love is many things none of them logical.

Movie Trailer for The Princess Bride (1987)

William Goldman was an American novelist, playwright and screenwriter. He won two Academy Awards for his screenplays of Butch Cassidy and the Sundance Kid and All the President’s Men. He is most know for his novels Marathon Man and The Princess Bride, both of which he adapted to film.